The last four days between Thursday and Monday provided many experiences and insights into different parts of Detroit, its ongoing changes and its people. Not enough for any concluding thoughts, but just enough for some ideas. The following paragraphs are therefore some unorganized impressions that are preliminary, might change during the next weeks and themselves include more questions than answers.

Most people in The D are overwhelmingly friendly and open to talk about their activities and views. This includes people walking along streets or sitting in restaurants and cafés. Many greetings while going for a morning run. Many friendly faces when buying coffee. I felt very safe during different times of the day or the evening. The only somehow scary moment was when someone from an outer suburb approached me, asked about my digital SLR camera. His wife and he told me to fly back to Europe because it is dangerous here and nothing interesting happening. I would not agree with him, nor would – I assume – most others around the Eastern Market this morning.

On the downside, there are just not so many people outside. Although the weather is quite pleasant during the last days, there is only limited outdoor seating and most prefer sitting inside. Some streets look empty even during regular business hours. May it be because of air conditioning, atmosphere or other reasons. For having lively public spaces within the city, these are definitely burdens. The city is built around cars, which means that most people are inside cars or buildings. Good to see that emerging developments such as Beacon Park show a different way how Detroit can be: lively, dense, communal. 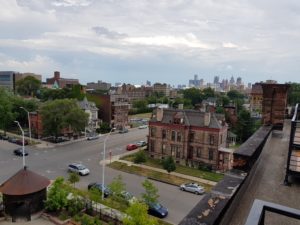 Second: city structure and getting around

I yet need to figure out where to put Detroit. Some parts feel like a large metropolis, some like a small rural village, some like monstrous concrete spaces, some like lush open areas. The central city neighborhoods, especially Midtown, are considerable different from inner and outer suburbs. Some outer suburbs – of which most are outside the city of Detroit – look wealthy. Most inner suburbs show vast open spaces, deteriorating, empty or collapsed buildings and a lack of basic services and shopping opportunities.

Cars remain the major mean for getting around. However, the central neighborhoods show a considerable number of cyclists and pedestrians. Some streets have kilometers of dedicated bike lanes either on the road or as protected bike lanes (e.g. on Cass Street). Walking is possible anywhere, but distances are huge. The most recent achievement adds much for connecting between New Center, Midtown and downtown, e.g. the QLine tram. Prices are very reasonable (1.50$ for 3 hours), services frequent and tram cars clean and comfortable. Given the large size of the city, it only serves a very small proportion of it along one major corridor. Difficult to judge between cause and effect, but this corridor attracts large private investments especially in upper class housing developments. One thing which seems to be quite new for central Detroit.

Using buses is quite unusual. There are at least a number of bus services of which many are scarcely populated. I took a bus from the suburbs along Woodward Avenue in the evening last Friday. It is cheap (2.00$), fast, convenient (including WiFi) and on time. However, the bus stops at a piece of lawn with a small sign, without shelter. In the central area, bus and QLine stops do not share stops and most stops are barely visible by just small plates. 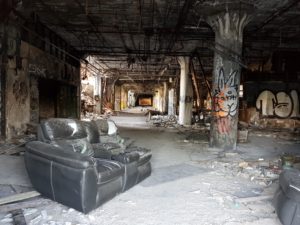 It is difficult to evaluate recent changes. However, downtown and midtown areas undergo major processes of change. Many newly renovated buildings, recently opened shops or cafés, construction sites and roadworks are a definite sign for change. This seems less true for the inner suburbs. Arriving in Detroit might give the impression of a thriving city which has a prosperous future. But this impression is triggered by only around seven of 140 square miles.

Streets are incredibly huge, often six or eight lanes without much traffic on them. Within the central city, many of these streets have already been converted from one way streets to two-way ones, including bicycle lanes. Can you believe having an eight lane one-way street in low-density neighborhood? This can only be something for concrete-lovers or (in summer) urban heat island-lovers. On the other side, this is great potential for bringing in cycling, public transport and more amenities for different modes of transport. Will more of this happen? How can the perspective of change be broadened from an ‘enclosed habitat’ around midtown towards the many other neighborhoods? 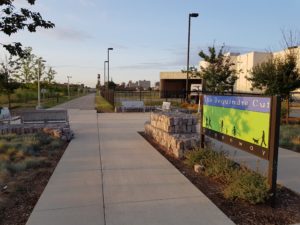 Many, many people are acting in diverse ways for changes. New opportunities seem to pop up everywhere and taken up by local entrepreneurs and start-ups. There is considerable support for them through foundations, city government and university, e.g. in Techtown Detroit. Change seems to be dominated by very active individuals, companies and foundations. Private money was a major driver for many of the recent changes, e.g. the QLine development, but also many renovations of buildings and opening up of shops.

It remains difficult to recognize where leadership of recent change lies. It is a vast amount of actors that engage in organizing spaces. It is not that easy to say who leads. What leads seems to be economic activity and economic opportunities. 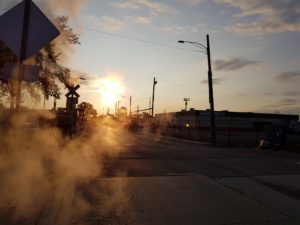 New ideas on the rise?

On the downside, it is somehow shocking to see how unimportant integrated public policy and planning is. It is definitely great to see much private engagement in pushing the city forward. It is engaging to see so many investments in different part of the city, extending into public spaces, transport infrastructure and alike. However, where and who is the integrated picture? Who holds accountable for future changes? And who safeguards that it benefits all different groups of urban society? Who engages for a city- and region-wide perspective, holding together many diverse neighborhoods and communities?

There are many successes that are worth being celebrated and advertised. But there is so much change happening that I am still looking for the strong voice of planners for an integrated and long-term perspective that binds community visions together with infrastructure, public budgets and economic interests. If I hear about large-scale housing developments – a good sign of hope for the central city – why is there no strong engagement to connect to public services, education, schools and alike? It is important to develop strong places and good design for new developments, but they also need to integrate into the city and be checked for emerging needs of their residents.

Which role is there for planners? I struggle to find a good answer to that. In a way, there are many very active, managerial and entrepreneurial people as kind of planners. In foundations, development companies of as engaged citizens, they promote and engage for change. These are somehow ‘new’ planners emerging from economy, some also from civil society. Their aims and actions might be beneficial to all. However, they lack democratic accountability, a comprehensive perspective and a long-term view that is characteristic of established planning definitions. Will the role of public planners be more like observers and promotors?

If it is about bringing Detroit back on the map, isn’t there a need of exactly this: engaged, motivational planners that push forward a long-term view all diverse citizens and places while aligning many different actions towards a joint direction?

See www.instagram.com/raumplaner for some photos I have taken during the last days.